Want to live an extraordinary experience and feel the warmth of the soulful winter holidays in a fairytale-like country? Romania has it all: friendly locals, jaw-dropping landscapes, unspoiled nature, stunning villages, tasty food and mind-blowing old customs. Winter is a special season for Romanians, as it brings with it the most important religious holiday of the year and that is Christmas. New Year is also celebrated with great pomp. In big cities, you will have the opportunity to enjoy fireworks and concerts with famous artists, whereas in the countryside you will find ancient ceremonies with traditional dances and songs. 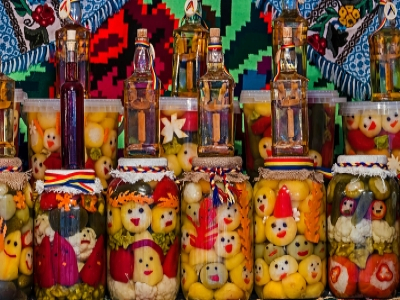 St Nicholas, 6th of December. Winter holidays begin with it and it’s celebrated in many European countries. This important holiday honours the generosity and kindness of St. Nicholas. He is called Mos Nicolae in Romanian. Children and adults receive presents in their shoes. St. Nicholas arrives at night, placing the presents only in the shoes of those people who behaved well. The naughty ones receive a twig that reminds them that they are punished for misbehaviour. The twigs are sold in gold, silver or decorated versions, but people often opt for a simple small tree branch instead of buying these fancy twigs. The presents are not as big as the Christmas ones, the most common gifts being sweets and fruits.

It is commonly known that snow on this day means that St. Nicholas shakes his beard for the winter to kick off. On December 5th in the evening, shoes (generally boots) are wiped, polished and left in front of the door or on a windowsill. People whose names are Nicholas and its derivatives celebrate their name days on this occasion, the ceremony being similar to the birthday one. It is said that St. Nicholas helps people who are ill or suffer.

Christmas, celebrated on the 25th-26th of December, is the most important holiday in Romania. Christians celebrate Lord Jesus’ birth with merriness and love. The Advent season begins on the 14th of November and ends on the first day of Christmas. During these 7 weeks, Orthodox people fast, meaning that they don’t eat food which comes from animal sources, such as meat, dairy products and eggs. There are a couple of days though when they can make an exception and eat fish.

On Christmas Eve (24th December), family members gather around the Christmas tree which is decorated on this evening or earlier in December. Children go caroling from door to door in their neighbourhood and they receive sweets or money as a reward. They also sing Christmas carols at home. Even adults or groups of people go caroling on Christmas Eve. In some regions, dances are performed along with singing.

On the night before Christmas, it is believed that Santa Claus arrives on its sleigh drawn by reindeers and leaves gifts in every house near the Christmas tree. Those who have been naughty throughout the year, don’t receive anything. Friends and relatives buy more or less significant presents for each other, for example gadgets, toys, clothes, money, holidays, accessories, home decorations, sweets and so on. Children write letters for Santa well in advance, in which they ask for things and make wishes. It’s the perfect occasion for family members to reunite and spend wonderful moments together. On the 25th of December, people check out their Christmas gifts and go to church. Some people prefer to open their presents on Christmas Eve. 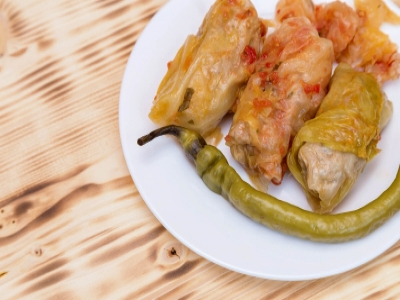 Pigs are sacrificed on the 20th of December, which is the Ignat Day. A traditional meal is "sarmale" made of cabbage or vine leaves stuffed with minced meat and rice. It is typically eaten with polenta (mamaliga) and cream. Another dish is the boeuf salad (salata de boeuf) which contains a mix of potatoes, chicken, vegetables, pickled cucumbers and mayonnaise, with olives and slices of hard boiled egg whites on top. It doesn’t include any beef, even if its name may make you think about it. Cozonac is a sweet bread, like the Italian panetone, with ingredients like walnut cream, yeast, flour, yolks, cocoa, nuts, but there are many varieties and according to region, the recipe is different. 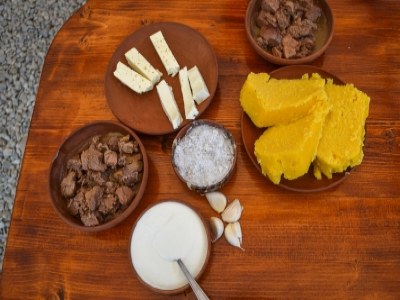 Another Christmas meal is aspic (Piftie or racituri) and it consists of vegetables, meat and garlic that are molded in gelatin. The aspic is consumed cold, sometimes together with hot polenta.

Pork is the main ingredient for many Christmas meals in Romania. It is used for making sausages, piftie, sarmale, stakes, soups, toba and stews. 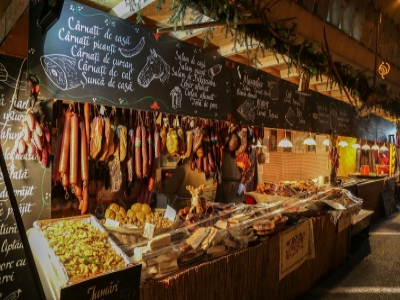 The most popular spirits for Christmas are tuica and palinca, drinks with high concentrations of alcohol.

Christmas traditions in different parts of the country

The Moldova region considers that Christmas is very important and prepares well in advance for it. Women cook traditional food and clean up their houses. They bake "colaci" called "Craciunei" (little Christmases) which look like braided breads in the shape of an 8 and they keep them hanged on the wall near the icons until the beginning of spring. Men take care of the animals and return any object that they might have borrowed. The bear dance is popular both in Moldova and Bucovina regions.

Bucovina. Carols help evil spirits go away. People should open their doors for carolers, it’s a sin if they don’t do it. Some carolers sing with a star to spread the good news of Jesus’ birth.

Maramures. Christmas brings along a lot of joy, food and kindness. Carolers dress up as old men, dance and sing. People prepare for a theatre play called Viflaim which depicts the birth of Jesus.

Oltenia. People poach the fire with a wood stick, saying some lyrics meant to protect their homes. Families clean up their households, thinking that this way their hens will produce many eggs and have chicks.

New Year, 1st of January. The New Year’s Eve celebrations begin early in the morning on the last day of the year. People dress as animals and perform traditional dances. Just like on Christmas Eve, people go from door to door and sing. The most popular song is a special carol called "Plugusorul" (little plough), but along with it carolers also ring bells, smack whips and wish everyone prosperity and high-yielding crops. They receive food or money as a reward. Another carol, "Plugul" (big plough), is performed in the evening, along with dances, costumes and musical instruments. In some parts of the country, especially in rural areas, the carol is accompanied by a real plough with horses. 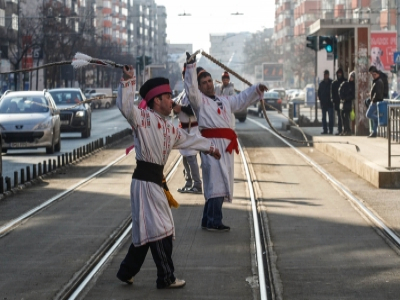 An impressive New Year’s Eve tradition is the dance ritual in which people are dressed up like animals, wear masks to impersonate animals, such as bears, goats and horses. The bear’s dance is very well known and appreciated. These dances represent death and rebirth. Masks are made of fur, wood and colourful materials.

There is a general belief that the way you spend the beggining of the New Year will influence how you will feel and act all year round. Thus, if you are happy or with the beloved ones when you start the year, you will be in the same situation the whole year. On the first day of the year, which is also St. Vasile’s day, children go from house to house and sing Sorcova, a carol through which they wish health and good luck to hosts. Sorcova also designates the colorful twig decorated with paper flowers that they use to perform this song.

Reasons for visiting Romania in winter

1. Discover the amazing customs, songs and dances on Christmas and New Year. Christmas carols sung by children or choirs will be a delight for your ears. The bear’s and goat’s dance, along with other popular rituals and group dances will leave you speechless. Try singing with the carolers, it will cheer you up on the spot!

2. Visit the Christmas markets in major cities. Although a quite recent trend in Romania, Christmas markets are present in several cities, like Bucharest, Cluj, Sibiu, Brasov and Suceava. They are usually placed in city centers, in big squares decorated with lights and Christmas trees. Take time to buy and enjoy the traditional food, mulled wine, hand-made objects, accessories, clothes, holiday masks, costumes and painted pottery. There is a big stage where carols are sung, but also numerous cottages where food and objects are sold. There’s also a Santa’s house where children can meet Santa Claus and his elves. Lose yourself in the magic of artistic shows, bring your children to take a ride in the carrousel and small trains, try the skating rink, watch the winter festivities, music bands, choirs and famous singers. The most impressive Christmas market is considered to be the one in Sibiu. Other small fairs and concerts are organized in various cities in the country. 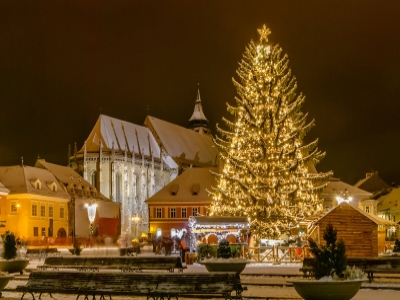 3. Eat the delicious Christmas food. There are so many types of meals and sweets that Romanians prepare for holidays. It is the perfect occasion to taste them either in restaurants or at family dinners. Don’t forget that Romanians cook a lot of tasty food for Christmas, so this might be one of the best culinary experiences in your life!

4. Enjoy the beautiful mountain landscapes. The Carpathians Mountains are magical in winter, so you don’t want to miss the spectacular views from the top of the peaks covered by snow. For the more adventurous ones, mountain resorts are equipped with ski and snowboard facilities. And let’s tell you a secret: there are enchanting castles located in the heart of the mountains and winter makes them look straight out of a fairytale!

5. Visit the villages in different regions to explore various holiday traditions. Probably the best place to spend Christmas is in countryside. This is where old customs are still preserved and Romanian culture is exhibited through traditional costumes, dances, rituals, songs and food. As locals are so merry and hospitable, they will be happy to tell you stories and introduce you in the festive atmosphere. Each region has its own habits, so you might be interested in doing a tour of them all during the holiday season.